Neurotransmitters are chemical messengers used by the nervous system to relay information from one nerve to another. Optimal neurotransmitter balance is required to maintain proper health. Imbalances can cause the brain and the body to be over- or under-stimulated, producing neurological or psychological symptoms. 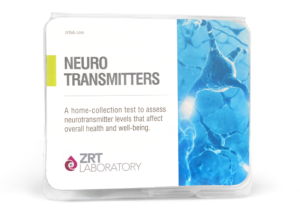 86% of Americans have sub-optimal neurotransmitter levels!

ZRT is the only lab to offer a 24-hour equivalent in four easy collections – resulting in a more accurate assessment of individual neurochemistry.

Most Convenient Method for Urine Testing

Main Neurotransmitters and Their Function in the Body